The race to launch Queensland’s first Bitcoin ATM has come to an end with Australian company Bit2Bit rolling out what is believed to be Brisbane’s first machine on May 16.

The Bitcoin machine, which is housed at The Roastery Café in South Brisbane, will be sent live on Friday allowing digital currency users to securely exchange hard cash for the cryptocurrency or vice versa. 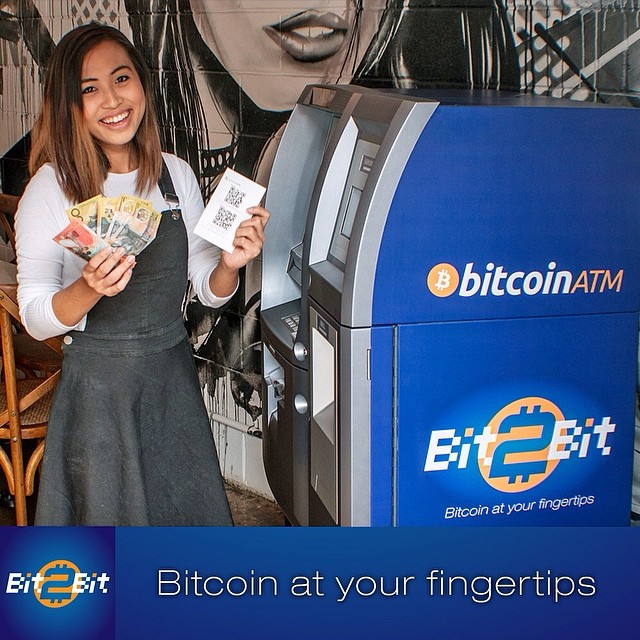 Resembling a standard banking ATM, customers can register for a Bitcoin wallet via the machine within five minutes, use or sell Bitcoins at the market price, add currency to their virtual wallets by feeding in cash, and sell Bitcoins to extract money.

The Roastery Café already accepts Bitcoin as alternative payment, meaning customers can pay for their coffee or cake via the world’s most popular electronic currency.

Bruce Carrall, co-owner of Rouge Coffee, said the addition of Brisbane’s first Bitcoin ATM to The Roastery Café will make it easier and more accessible for everyone to trade in digital currency.

“We’ve seen a surge of interest from the mainstream population wanting to be involved in the Bitcoin movement,” he said.

“The currency has grown more than one thousand per cent each year for the past four years, and people are also starting to use it as an investment.

“The ATM is a more effective tool to buy and sell Bitcoin compared to other methods because it’s a lot faster, safer and more convenient than using some sort of exchange.”

Mr Carrall also said the possibilities of Bitcoin are endless and can be used for much more than buying a coffee.

“I think we’ll continue to see a spike in the demand and value for Bitcoin as more and more ATM’s enter the market.” Bitcoin, which came into existence in 2009, is a digital cryptocurrency that allows peer-to-peer payments to be made online.

Bitcoin advocates say the system works because it is completely distributed and relies on trust in a mathematical algorithm, not in a bank.

The Bitcoin network is made up of regular users who run 'Bitcoin miners', or powerful specialised computers, to process transactions and ensure there is no double-counting.

Bitcoin may provide an easier answer to international trading as it’s a global currency and can be accepted everywhere, while customers don’t have to worry about currency conversion.

Customers can catch a glimpse of Brisbane’s first Bitcoin ATM at The Roastery Café, which is located at 25 Glenelg Street in South Brisbane. 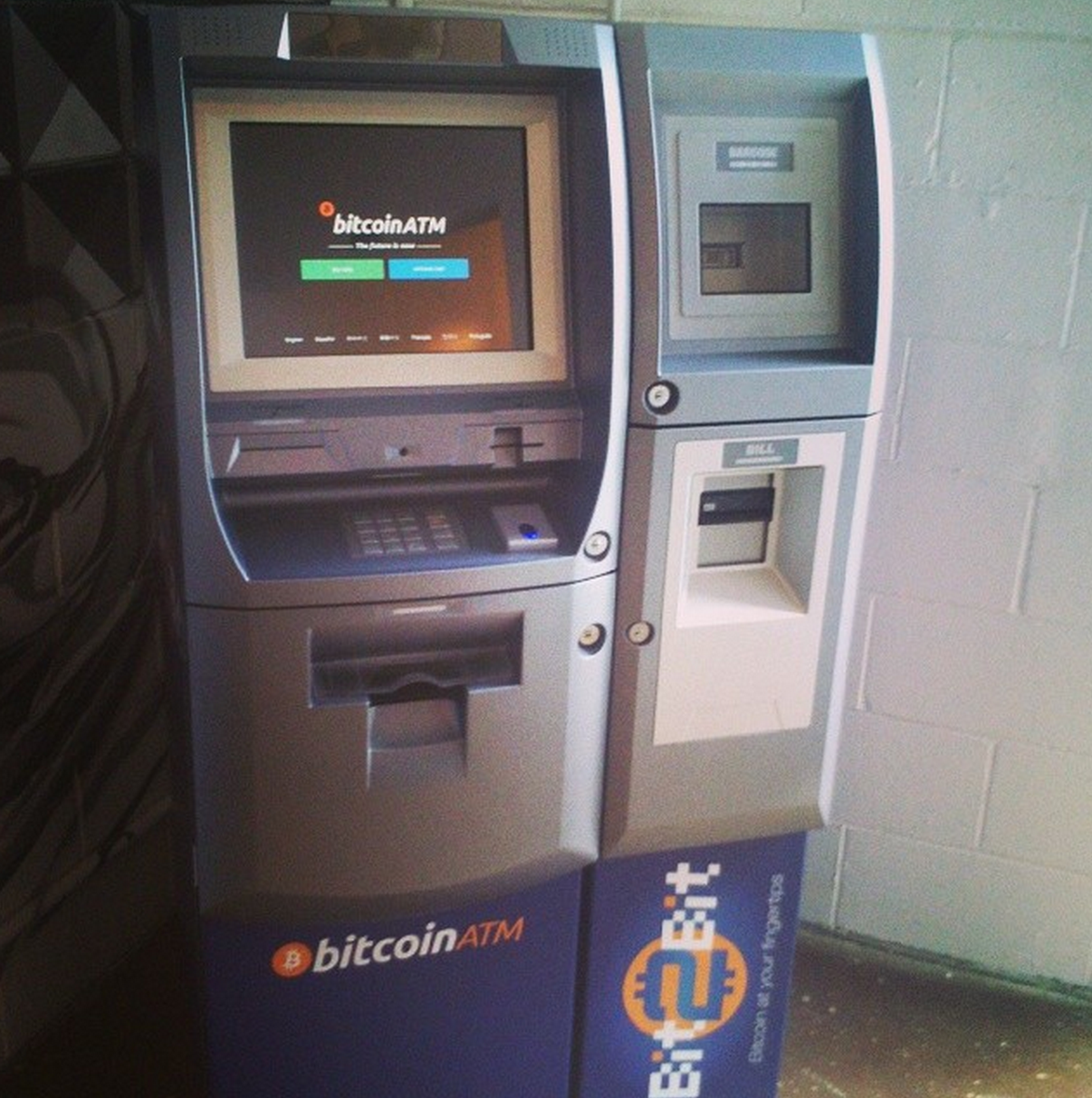 Bitcoin at your fingertips. Bit2Bit is an Australian company focused on solutions for the crypto-currency markets. For more information, visit www.bit2bit.co

Genesis Coin is excited to announce the latest feature in our industry-leading Bitcoin ATM backend: a built-in media platform designed for maximizing revenue potential from the Genesis machines.

Genesis operators can now create and deploy a custom slideshow of graphics that will cycle when their machines are not in use— perfect for additional branding, education, or advertising additional products and services.

“We continue to develop functionality with the goal of solidifying the Genesis platform as the premier machine for the business-oriented individual,” says CEO, Evan Rose. 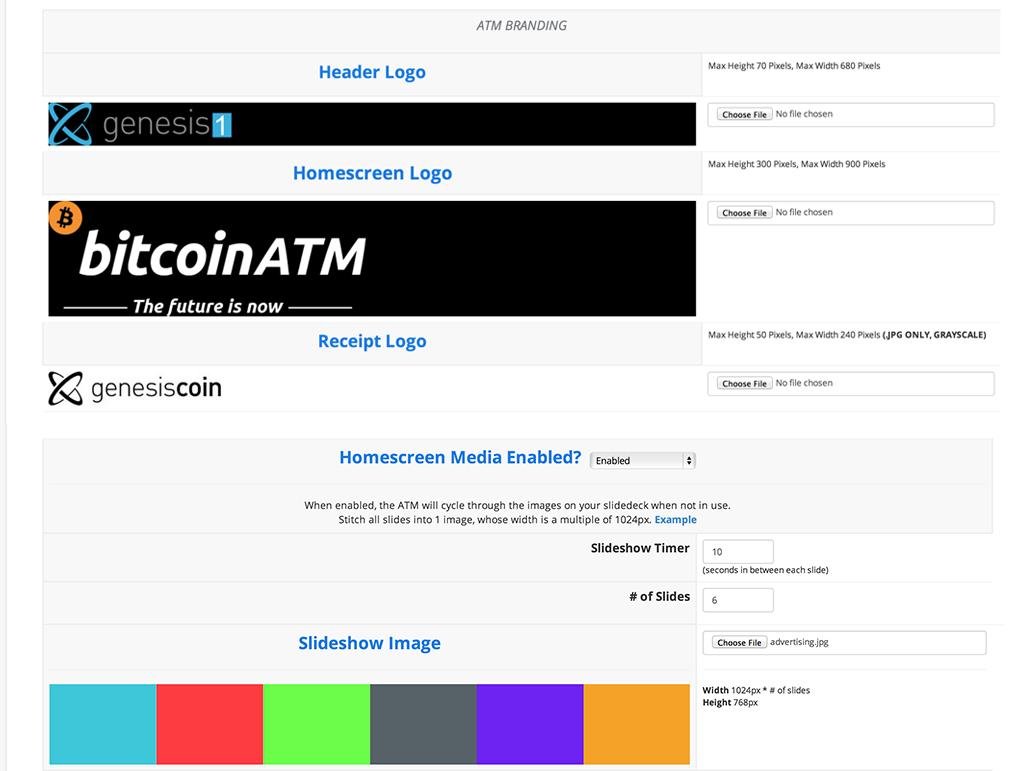 Genesis remains focused on building the ultimate in white-labeled revenue-optimized solutions for operators looking to build their own unique brand in the Bitcoin ATM industry.

“Our goal has always been to maximize revenue per square foot for our operators, providing them with unique value-added services such as Litecoin and Dogecoin support, ensuring the longevity of their business even during market lulls. Now, they can enjoy the potential of an additional revenue stream through the media platform,” remarked Rose.

The latest development is only a brief glimpse at what will ultimately become a real-time advertising platform uniquely tailored to the crypto-currency market. Companies will be able to bid on screen real estate in the expanding Genesis kiosk network, placing their products, brands, and services directly in front of their prime demographic.

Genesis Coin is proud to unveil its Genesis1 model in Whistler, Canada, a West Coast tourist hotspot known for its world-class ski slopes. The machine is owned and operated by Logicoins. 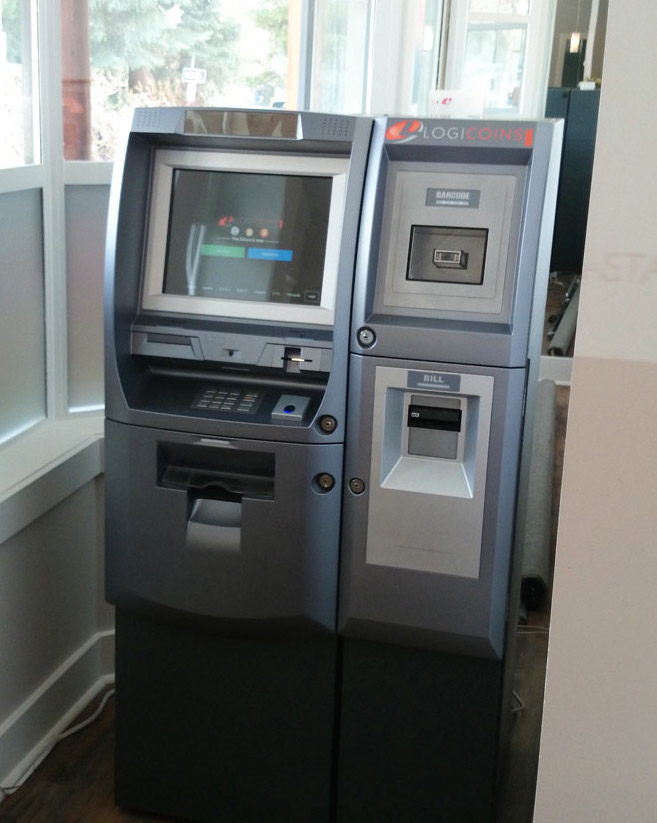 Representing the next step in the evolution of crypto-currencies, the Genesis1 ATM differs from other Bitcoin ATM models in that the machine supports Litecoin and Dogecoin as well.

“We're confident in the North American Bitcoin ATM market.” said Rose. "Canada has played a crucial role in Bitcoin adoption, and we are elated to see operators deploying our technology in regions of the world which have been historically kind to crypto-currencies.”

Whistler Blackcomb is one of the largest ski resort in North America. In terms of size, Whistler is 50% larger than its nearest competitor and is visited by over 2 million people per year. The Genesis1's appearance in Whistler comes after Genesis Coin unveiled ATMs in Tijuana and Quebec.

The Genesis1 will be a crucial part of The Logicoins Resort Project, providing access for customers to a cash-in and cash-out crypto-currency ATMs with the added support of Dogecoin and Litecoin.

The Bitcoin ATM is now live and operating in Whistler. West Coast Float is open to the public from 10am-10pm each day of the week.

Genesis Coin is proud to announce the unveiling of the first Genesis1 Bitcoin ATM in Quebec City, the capital of the Canadian province Quebec.

The machines, owned and operated by Bit2Bloc, are located inside the Auberge Amerik Hotel and adjacent to Baguette et Cie coffee shop. The Auberge Amerik is a historic site built in 1898 and located in the heart of Old Quebec. With its convenient proximity to the old City’s restaurants, freeway, and train station, it offers guests a distinctly metropolitan experience.

The Genesis1 ATM platform supports multiple coins, providing a streamlined gateway into the nascent world of crypto-currencies. Bit2Bloc’s Genesis1 is compatible with both Bitcoin and Litecoin, providing cash in & cash out services for the Canadian Dollar. 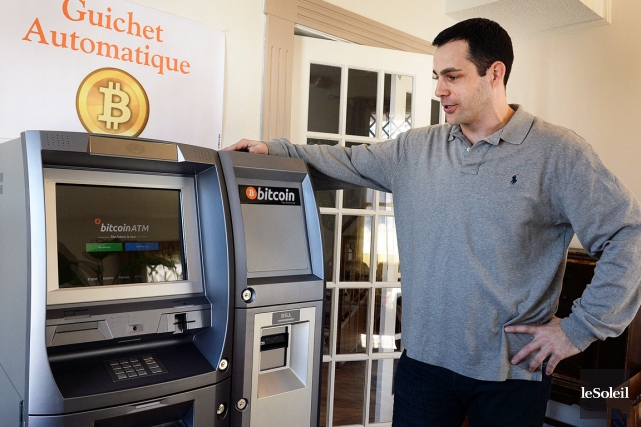 The Canadian Bitcoin marketplace has been seeing dramatic growth, and the country remains on the forefront of this new technology. Located in the center of Canada’s second largest city, the new machine will be easily accessible to the thriving economy of Old Quebec.

“Canada has proven itself to be a leader in bringing tangibility to the otherwise digital world of Bitcoin.” said Genesis Coin CEO Evan Rose, “We want individuals to experience Bitcoin in its most elegant form: swift, simple, secure.”

The new machine is open to the public Monday through Saturday from 9am-6pm, and Sunday from 9am-5pm.

Bit2Bloc was created by passionate crypto-currency advocates with the goal to facilitate growth of this new market within their community in Quebec. Bit2Bloc allows Quebecers to easily buy and sell both Bitcoin and Litecoin. For more information visit www.Bit2Bloc.net

Genesis Coin is proud to announce the unveiling of the first two Genesis1 Bitcoin ATMs in Tijuana, Baja California, Mexico. The machines, owned and operated by Bitcoin42, are located at Tijuana’s Bit Center. The Center, which focuses on local development of business, innovation and technology, provides working space for some of Mexico’s leading startups.

The Genesis1 ATM's differ from other Bitcoin ATM models in that the machine supports Litecoin and Dogecoin as well. Bitcoin42 acquired and deployed two machines, one accommodating Mexican pesos and the other US dollars.

Tijuana is a happening place for Bitcoin ATMs to spring up, with a burgeoning alternative culture scene, multi-national appeal and tourism. 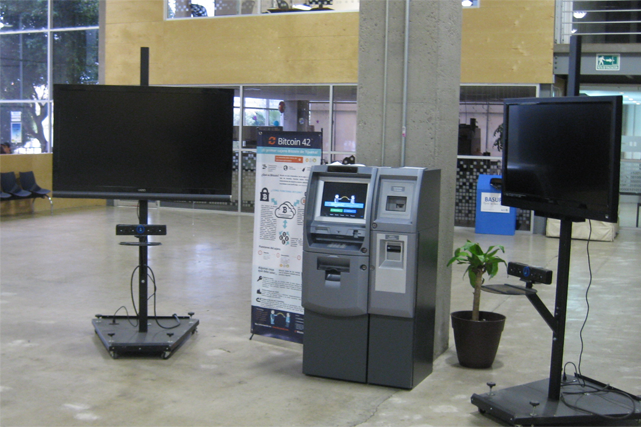 "The Genesis1 is an ATM machine ready for the 21st century, fully capable of supporting the bilateral exchange of multiple cryptographic currencies," said Genesis Coin CEO Evan Rose, who notes that multiple Genesis1 machines will be coming online in the coming weeks around the world.

This isn't only a win for Tijuana. San Diego, which sits 15 miles north of the Mexican border and Tijuana, will benefit from the close proximity of the machines as well. Historically, Tijuana and San Diego have been seen as sister cities, and were even considered for the first multi-country Olympics in 1989, which would have been co-hosted by the two neighboring border cities.

“We're confident that Bitcoin ATMs will become an increasingly common technology. The future is here, and it seems like North America is out ahead in that regard," stated Rose. "As a California based company, we are excited to partner with our neighbors to the South in Baja, on this and future projects."

The Genesis1 technology will allow Bitcoin42 to give 10% of all profits generated by the ATMs to non-profit associations across Tijuana. Customers will even be able to choose the cause they wish to donate to — “Think Global, Act Local!”

The Bit Center is open to the public Monday through Saturday.

Bitcoin42 is comprised of a dedicated team of experts and Bitcoin enthusiasts unified under a common goal of establishing a fair, fast and inexpensive means of payment. The company’s business model focuses on cultural, social, ecological, and economical projects that aim to tackle challenges in our society by developing creative solutions. To learn more, visit www.Bitcoin42.com

Genesis Coin Inc. is pleased to announce that the company’s flagship Genesis1 Bitcoin ATM will be showcased at this year’s ATMIA USA conference, “Reinventing the ATM,” in Orlando, Florida from February 11th to February 13th at the Loews Royal Pacific Resort at Universal Studios. ATMIA USA’s annual conference and expo is the largest ATM-focused event in the world. The Genesis1 ATM will be showcased in the Grant Victor Innovation Lounge, along with other products that highlight the next generation of self-service technology.

“Bitcoin, while still in its infancy, has already proven itself to be a serious platform for facilitating economic exchange on a global scale… and yet this only scratches the surface of the technology’s true potential,” remarked Genesis Coin CEO Evan Rose. “The unique properties of the Bitcoin payment network represent a tremendous boon for businesses and consumers alike. Bitcoin eliminates chargeback risk while dramatically reducing processing fees, and consumers needn’t worry about theft of their private financial information.”

The Genesis1 provides instantaneous conversion services between traditional currencies and Bitcoin through a user-friendly interface. While Bitcoin remains an esoteric concept to many, novices will find that the future of currency exchange is familiar. Fast, intuitive, and with no previous experience or degrees in cryptography necessary, the Genesis1 aims to be the premier gateway to digital currency.

“While the Bitcoin network is growing at an impressive rate, the barriers to adoption remain high. Our Bitcoin ATM all but removes theses hurdles by allowing anyone access to the technology,” remarked Rose. “New users can get their first wallet in under a minute, and current holders can enjoy immediate liquidity. ”

The brainchild of a programmer known to the world only as Satoshi Nakamoto, the Bitcoin digital currency transcends all borders and remains a top contender for the title of the world’s first global currency. Bitcoin is a system based on voluntary peer-to-peer interaction. With the entire market cap of Bitcoin holding steady around $10 billion, the potential for growth is staggering.

“At Genesis Coin we believe that digital currency will shape the future of how we facilitate exchange on a universal scale,” reflects Rose, “Though the Bitcoin software has not yet reached version 1.0, it has already engendered a wave of transformation, opening up the doors of the global economy as never before. Merchants and consumers who had hitherto been separated by fees as high as the seven seas can now transact with ease.”

Thank you for contacting Genesis Coin! A representative will reach out shortly.

Keep up on our always evolving product features and technology.
Enter your e-mail and subscribe to our newsletter.